The 19th Amendment of the United States of America passed by Sixty-sixth Congress on June 4, 1919, and was adopted on August 18, 1920, guaranteeing American Women the Right to Vote.

Women's Suffrage, the right to vote in political elections, began in the 1800s.

Women organized, petitioned, and picketed to win the right to vote, but it took decades.

1848 The first women's rights convention is held in Seneca Falls, NY. The Declaration of Sentiments is signed.

1870 Congress ratifies the 15th amendment: “The right of citizens of the United States to vote shall not be denied or abridged by the United States or by any State on account of race, color, or previous condition of servitude.”

1872 Susan B. Anthony arrested for voting for Ulysses S. Grant in the presidential election.

1878 The Women’s Suffrage Amendment is first introduced to congress.

1893 Colorado is the first state to adopt an amendment granting women the right to vote.

1896 The National Association of Colored Women is formed.

1916 Alice Paul and her colleagues form the National Woman's Party  and begin demonstrations, parades, mass meetings & picketing the White House over the refusal of President Woodrow Wilson and other incumbent Democrats to actively support the Suffrage Amendment.

1917 In July, picketers were arrested on charges of "obstructing traffic." including Paul. While imprisoned, Alice Paul began a hunger strike.

1918 In January, after much bad press about the treatment of Alice Paul and the imprisoned women, President Wilson announced that women's suffrage was urgently needed as a "war measure."

1919 The federal woman suffrage amendment, originally written by Susan B. Anthony and introduced in Congress in 1878, is passed by the House of Representatives and the Senate. It is then sent to the state legislature for ratification.

Timeline summarized from the Women’s Suffrage Movement in the U.S. Compiled by the Center for American Women and Politics –August 2014 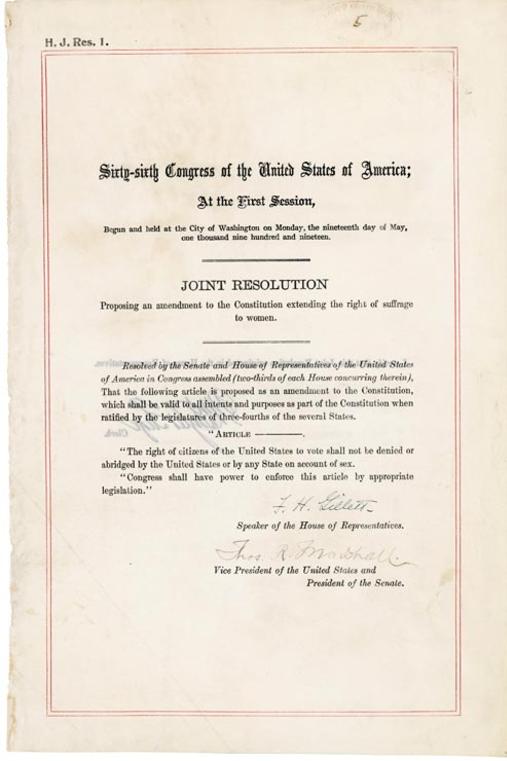 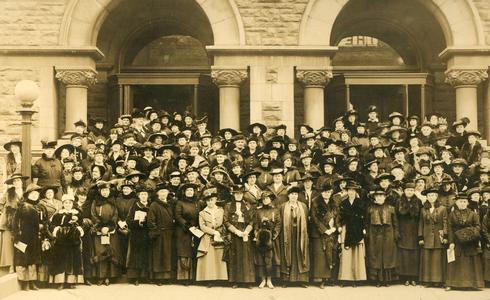 Partnering Organizations for the Celebration of Women's Suffrage in Warren County, Pennsylvania include:

Suffrage Centennial Celebrations
The Warren Suffrage Centennial group continues with many activities this Spring. This is the 100th Anniversary of the passage of the 19th Amendment giving women the right to vote.
A unique way to learn about what was happening in Warren County is a geocache developed by Wes Ramsey, Ex. Director of Penn Soil RC&D Council and geocache enthusiast. People are challenged to find the exact location where the Justice Bell – a symbol of women’s right to vote was showed. It traveled in Warren County on a flatbed truck in 1915 and Pennsylvania, as a replica of the Liberty Bell. Suffrage women spoke about women’s rights in Sheffield, Clarendon, Warren, and continuing traveling thought out Pennsylvania and the USA. Learn why the clapper was tied to its side to remain quiet. Go to the geocache web site and look for “Warren County PA Suffrage Centennial” for details and enjoy with family and friends to learn about this history and locate the site.
The Daughter of the American Revolution scholarship deadline is March 15th with the essay theme of the 19th amendment and the suffrage movement. Students can contact their schools or Penny Wolboldt, DAR representative for applications.
The Warren County Historical Society at 210 Fourth Ave, Warren has a display of notable women and items from the Suffrage era and beyond.
The Jamestown Fenton History Center on March 28th will conduct costumed guided tours of women who made the suffrage movement possible including Elizabeth Fenton and her daughters, Josephine and Jeannette, Edith Angie (who spoke in Warren) and Louisa Grandin whose life is portrayed that day. For more details go to  https://fentonhistorycenter.org/event/10670/,  to reserve times, costs, or call 716 664 6256.
In June, the Warren Public Library will host a book signing event with Penny Colman, a native of Warren and author of her new book and powerpoint presentation The Vote: Women’s Fierce Fight.